Zamasu Revived?! The Curtain Rises On The Universal Conflict Arc!

The rest of the group from the Prison Planet have made it safely back to Beerus’s planet, where they regroup with Whis. Xeno Goku and Xeno Vegeta return to their own universe, wishing the others good luck. Suddenly, the Supreme Kai of Universe 6 appears and informs the group that his universe has been invaded, and that Champa and the other Destroyers have not responded to his attempts to contact them. Vegeta declares that he will take care of these enemies. Meanwhile, in Universe 6, Hit, Cabba, Caulifla, and Kale find themselves outmatched by the invaders: a pair of Tuffle Neo Machine siblings named Oren and Kamin, who were among the escapees from the Prison Planet. Oren and Kamin have the advantage due to their regeneration and their knowledge of their opponents’ abilities, and are overpowering them until Vegeta and Future Trunks join the fray. Elsewhere, Zamasu discusses the situation with the group’s leader Hearts, who reveals that their ultimate plan is to defeat the Omni-King. Vegeta and Trunks are able to turn the tables on Oren and Kamin, so they decide to reveal a secret technique. 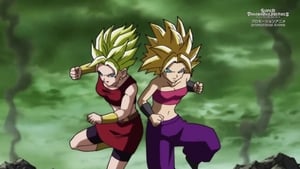