The Gods of Destruction Invade! The Beginning of a New Battle!

In the Time Nest, headquarters of the Time Patrol, the Supreme Kai of Time informs Xeno Trunks and Xeno Pan that her mystical bird Toki-Toki has disappeared. She sends the two of them to find him, while also being worried about a supposed “Bird of Catastrophe” that has been released. Meanwhile, Toki-Toki has appeared on Earth in the main timeline, where Goku finds him while training with Vegeta, Gohan, Piccolo, Krillin, and Android 17. Xeno Trunks and Xeno Pan arrive and are happy to see that Toki-Toki is safe, with Xeno Pan explaining that his existence is very important for the inner workings of the multiverse. Suddenly, the group is interrupted by the arrival of all twelve Gods of Destruction. 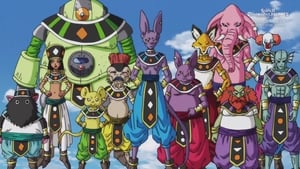