Goku vs. Goku! A Transcendent Battle Begins on the Prison Planet!

Goku and Vegeta’s training with Whis and Beerus is interrupted by the arrival of Future Mai, who tells them that Future Trunks has been captured. A mysterious figure emerges, introducing himself as Fu; he tells Goku, Vegeta and Mai that Future Trunks is trapped on a world called the “Prison Planet”, a planet where warriors from alternate timelines and dimensions fight as part of an experiment conducted by Fu. The trio arrive on the planet and meet an alternate version of Goku called “Xeno Goku”, who transforms into Super Saiyan 4 and attacks Goku, who reacts by transforming into Super Saiyan Blue. During the fight, Goku discovers that there is an invisible barrier around the Prison Planet that prevents them from escaping. Then Fu disappears, and the two Goku agree to work with each other to escape the planet. In the end, Fu observes the Prison Planet and tells a seemingly evil Saiyan that his time will come. 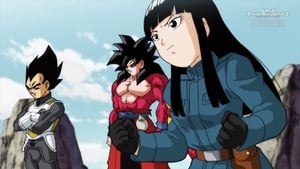 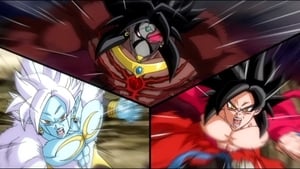