Oren and Kamin suddenly convert their bodies into energy and possess Kale and Caulifla, using their bodies to attack the others. Vegeta, Trunks and Hit develop a plan; Trunks and Hit fight and immobilize Oren and Kamin, with the siblings forced to abandon their host bodies when Vegeta fires a Final Flash at them. Before the battle can continue, Hearts appears with a strange crystal and immobilizes all of them with his psychic powers. He reveals that the crystal is a Universe Seed, explaining that it will give him the powers to destroy the Omni-King, the Supreme Kais, and the Gods of Destruction. Hearts creates a strange crystal cube, which he uses to destroy a nearby planet, and prepares to do the same to the group of fighters, but Oren and Kamin insist on fighting them again. Zamasu also reveals himself, which shocks Trunks and Vegeta. Hearts reads Hit’s mind, determining that he believes Jiren to be the strongest fighter in all the universes. Meanwhile, in Universe 11, Jiren and Toppo are facing off against Cumber. Elsewhere, it is revealed that Goku is alive and with the Grand Minister. 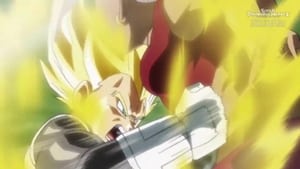 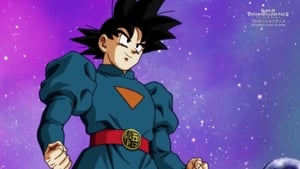 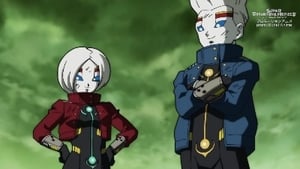